I haven’t been home much these past couple of days, so my posting on time has really been sucking. 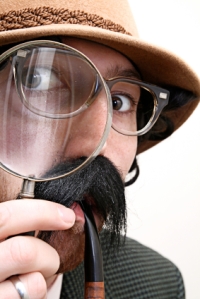 My creative project for yesterday was a bit different and less tangible than usual – really, it was an experience rather than an object. My friend Charlotte called me up yesterday morning with a hilariously intriguing suggestion and favour. Friends of hers were hosting a Murder Mystery party at her house and they needed one more person to play the remaining character.

I went through about three stages of reaction:

At first, I was surprised since I’d never heard of anyone actually participating in a murder mystery in real life (I loved the game (and even better, the movie) Clue when I was younger, but it didn’t expand beyond that).

The next reaction was amusement since it was something novel and unique and highly entertaining sounding. I do love me some quirkiness!

The amusement was then followed by utter terror (okay, that was a bit dramatic) because as I’ve told many people before, improv is one of my biggest fears. Seriously! The thought of coming up with witty dialogue on the spot and performing in front of others makes my belly turn. Ahh, the pressure!

So in the end, I agreed (albeit reluctantly) out of curiosity, the desire to push myself into new situations, and because it would most definitely count towards my 17th day of creativity.

As it turns out, it was one of the most hilarious experiences I’ve had in awhile (and I am lucky to have quite a bit of daily hilarity in my life)! Meeting really innovative, imaginative, and awesome people was fun! The best part though was the game itself. Someone must have found it at a thrift store and it just had to have been produced in the 90’s. Lots of references to cyber cafes, ‘steamy’ internet chat rooms and deceit.

Ingredients for a Murder Mystery Night

So yeah, I wasn’t a star actor and I didn’t give the best performance of my career, but fueled by a steady stream of cocktails, I put myself out there and participated in something damn creative.