Oops! This post is a day late. I promise that I actually finished my Day 10  project yesterday afternoon (early this time), but was out of the apartment all evening/night so I never got a chance to actually post it.

I find that even though this 30 days of creativity project is really exciting and motivating, it can fill me with anxiety at times, my head swirling around with multiple ideas, and digging for more. Sometimes I walk around, trying to force some creativity, instead of actually just allowing it to happen organically. Time limits, ahh!

I’m actually trying to make my projects with materials that I already own (for the most part), instead of going out to buy a bunch of things and spending a lot of money. I want to keep it simple.  At least for now (I may get desperate later on in the month!) So, this current approach makes it a bit more limiting.

Yesterday, I wanted to decorate a piece of furniture (painting it, covering it with pretty textured paper, stenciling it, etc), but I didn’t have the materials or the time. I then decided I was going to just decorate a picture frame or something a bit more small scale. I found an old picture frame in the closet that was falling apart (it was missing the backing) and picked that as my focus.

Instead of painting the actual frame (it was lovely looking as is), I decided to paint the glass instead. Since I’m not very good at painting, I was just going to paint some simple trees and flowers and maybe a bird or two. I doodled a bit, and ended up sketching some daisies. I wanted to include some words in my painting. Something inspirational? Some quote? Something random?

Back when I first moved to Peterborough, my ultra-cool friend N. made me a mix cd as a gift. I can’t remember everything that was on it, but the song that stood out most to me was this really poppy, cute, and subtly vulgar track by a band called Royal City, a really awesome (but now sadly defunct) Toronto band in the early 2000’s. The song was called “Daisies”. It had been years since I’ve listened to them, but a few weeks ago, their album showed up at our apartment. I can’t stop listening to it! I love the banjos and I dance a lot complete with foot stompin’. It’s fun to rediscover great music!

So I put it on again while I painted and incorporated my love of that one particular song into the piece. Inspiration! 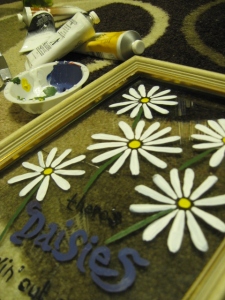 I painted it all up and then I included a piece of spring themed scrapbook paper as background. It’s now hanging in our kitchen. Fun! 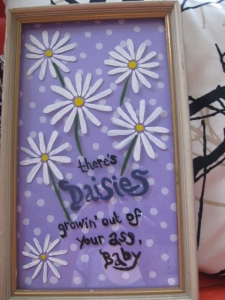 There’s daisies growin’ out of your ass, baby- Royal City

I couldn’t find an actual video for the song, so here is another one (unfortunately not one of the better tracks) from the same album, Alone at the Microphone.