So one of my goals this year was to learn how to garden (or at least attempt to). I read up on some basics and then bought a really fun looking and simply spelled out book on urban gardening. I was sitting in the kitchen with a friend of mine that was in the midst of preparing to spend the next 8 months or so in an organic community based farm out in nova scotia. I was so excited for her and so incredibly envious, despite the fact that I had no skill and minimal knowledge (limited to, you know, basic googling) about agriculture. She recommended checking out this super cool women from toronto who does a lot of work and education about growing plants in small spaces (patios, rooftops, balconies, fire escapes, etc). turns out, Gayla Trail is also a photographer and graphic designer. she’s one of those people who you wish could be your friend! ha.

check out her popular gardening site, you grow girl

she also has a photo blog called making happy

I made my first attempt at growing seeds a month or so ago, and completely failed. I used egg cartons and filled them with soilless medium and poked the tiny cherry tomato and mixed sweet pepper seeds in. I really had no idea how much to water them and I think I went a little crazy. Our apartment is really dry and it was still cold outside with drafty windows. The tiny seeds had no chance. I was sad when I finally got around to throwing away the dried up cartons. I didn’t think about trying again until a week or so ago. I decided to go the (fingers crossed) ‘foolproof’ route and purchase one of those simulated greenhouse kits – which is essentially plastic trays with plastic dome lids and soil ‘pucks’ that expand with water. I had read several places that they were to be kept in a bright and warm place (but not direct sunlight). A friend of ours had used a similar kit though and recommended keeping the covered tray in a dark space, such as a closet. She said that her seedlings sprouted up successfully. Worth a try I suppose!

So it’s into Day 3 and this morning I checked on  them with spray bottle in hand. I notice this little guy! 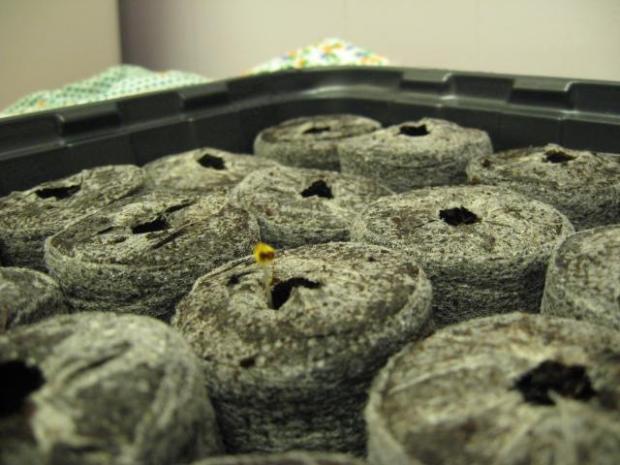 Really, it’s not a big deal, but this is a first for me! So I did a happy dance. Hopefully I can keep it going. I bought some worm (poo) plant compost today from Greenshire Eco Farm just outside Lindsay Ontario. I met one of the co-founders at the Wellness Expo this afternoon. She was genuine and passionate and was telling me about the structure of their farm. It’s a co-operative, run by ten different members right now with a vast array of knowledge and skills. What a great idea. It’s more financially accessible and guarantees a more manageable work load! They started in 2009 so they are still in the process of building and expanding. They do a lot of Equine Therapy and their vision is to create a centre for education and arts, as well as an eco-tourism destination. They also have a CSA (Community Supported Agriculture) or food box program where you can purchase a full or half share and receive fresh fruit and veggies all season long. Uniquely, they are now offering an ‘outside the box’ program where they will send you emails with all the produce that they have available and you can choose accordingly. I’d love to go visit sometime.

I’ve been trying to green up our space lately. There are birds and tree prints everywhere, but now there are living (and will hopefully stay that way) things as well!:

lavender and chocolate mint herbs purchased from the market 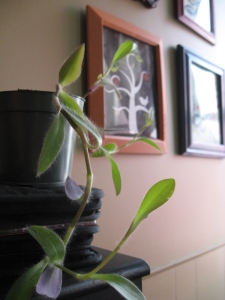 To those who know what they’re doing and for those who are experimenting: Happy growing folks!